Please note: we are currently 2+ weeks behind on making and shipping orders. If you need your order by a certain time please contact us to see if we can accommodate! 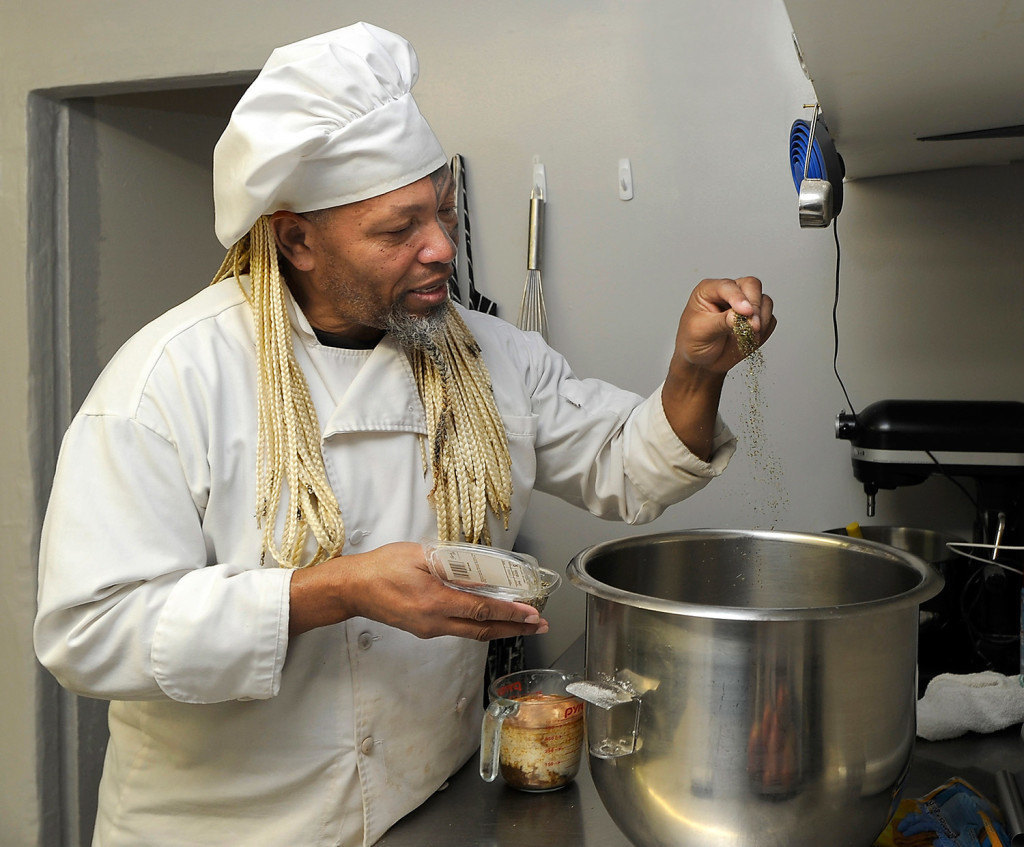 STANDISH — When Ahura Diliiza’s physician told him he had hypertension and needed to cut out salt, Diliiza figured he’d better listen. But he wasn’t happy about it. He used salt on everything.

“No salt?” Diliiza said, describing his reaction to the doctor’s orders. “That means no this, no that. Of course you have that moment where ‘My life is over.’ ”

Eventually, he came around, went on a diet and at the same time cut out salt completely. Over eight months, he lost 75 pounds. And he began to do some research.

“I went to the grocery stores and read how much salt is in everything, and I was totally appalled,” Diliiza said. “It’s no wonder people have such high-sodium diets.”

Now Diliiza, 55, is spreading the low-sodium gospel through the Daily Bread Bakery, the business he opened here in June. Everything he makes is either very low or no sodium. The bakery sells a variety of breads as well as pastries such as cinnamon rolls, scones, muffins, raspberry bars and creme horns. On Saturdays, little girls come in with their moms for high tea, choosing fancy treats from tiered silver trays. All of the leavening agents used to make these products are sodium-free. There is not a single salt shaker in the building.

Federal dietary guidelines recommend Americans consume no more than 2,300 mg of sodium per day – the amount found in a teaspoon of table salt – but on average they consume about 3,400 mg, most of it from restaurant meals, as well as processed and packaged foods. Too much salt can lead to hyper- tension, which in turn can lead to heart attack and stroke.

Lori Kaley, a nutritionist in Mount Vernon and a spokesperson for the Maine chapter of the American Heart Association, hadn’t heard of the Daily Bread Bakery – or any other low-sodium bakery like it – but thinks it’s a “really terrific” idea.

“If people try the products and they like them, that’s great,” she said. “Part of the concern is that our taste buds are so attuned to a lot of salt that we don’t like the taste of less salty foods.”

Proof in the Taste

Some time after Diliiza cut salt out of his diet, his taste buds “woke up,” and he said could taste other flavors much better. But for those who still use salt in their diets, while his white sandwich bread has great texture and looks delicious, their reaction upon tasting it may be what mine was: “This needs more salt.”

Think about it, though: How many people eat a plain slice of bread? Spread peanut butter on a slice, or toast it for breakfast with a little butter and jam, and I bet you won’t notice the missing salt. The lack of salt in his cinnamon rolls – a customer favorite, he says – is also noticeable, but the cinnamon goes a long way in making up for it.

And I didn’t miss the salt at all in his fruit bars. (The raspberry bars are another customer favorite.)

On a recent weekday, customers didn’t seem to mind, either, even those who weren’t on low-salt diets. Occasionally, someone will ask Diliiza to make their order with salt (he refuses), but most appear to be like Dan Kasprzyk, a Standish resident who is a regular.

Kasprzyk (“It’s like Casper the Friendly Ghost, but he’s a Polish ghost”) is not on a low-sodium diet. He comes, he said, because “the food is awesome.”

On a recent weekday, Kasprzyk was among a steady stream of customers. Diliiza said he has customers who drive from as far as Portland, and even New Hampshire, so they can indulge in baked goods they might otherwise have to give up. Diliiza realizes that some of the treats he makes are not exactly health food even without the sodium – but excepting the low-to-no salt, he leaves it up to his customers to manage their own diets and behave responsibly. (The baker himself has managed to stay within 5 pounds of his goal weight despite being surrounded all day by creme horns and cookies.)

Ahura views his role as a helper. He focuses on eliminating salt rather than sugar and fat at his bakery because eating too much salt and the resulting hypertension were the problems he had to tackle personally.

“People have the right to eat what they want,” he said. “I just don’t promote over-indulgence. Business is one thing, caring for people is another. I manage to do them both.”

Diliiza relies on other flavors to disguise the lack of salt in his products – citrus, cinnamon, allspice, paprika, cumin and more. For his pizza bread, he figures out how much sodium is in an ordinary slice of pizza and distributes that amount over a half-dozen loaves. He uses low-sodium sauce and cheese, onion, garlic, chives and a touch of ordinarily salted cheese for flavor.

“I’ll do something that gives the olfactory sense power over the actual taste, and then make it so it’s totally appealing to the eye,” he said.

He has another trick, too, one that’s a lot more surprising than pumping up other flavors: He talks to his dough. Literally. He talks to it the way he would speak to a child, encouraging it “to be what it needs to be.”

“Then I offer prayers that it may be transformed into what is good and nourishing to help those that eat it,” he said.

While Diliiza is busy making the dough, his wife, adult daughter, an apprentice, and a few young employees help him run the place.

Coming Back to Bread

Diliiza has undergone a transformation from the time he lived in Westbrook and ran a metaphysical school called Unicorn Cove. He lost the Westbrook school about three years ago, and has dramatically scaled back his otherworldly projects. A self-described telepath, he still gives private readings and teaches online classes in subjects like astrology, Tarot and dream interpretation, but he focuses on the bakery. Once intense, he is now relaxed and calm. “A lot has changed since then,” Diliiza said as music from Enya played in the background. “I’m not quite so cocky anymore.”

Diliiza grew up in South Central Los Angeles, a child of abuse and hunger. He never met his biological father. He developed an interest in baking when he was about 8, after he discovered the flour-and-salt modeling clay mixture he made in school was edible. With the help of a couple of cookbooks and others who liked to bake, he learned how to make bread so, he says, he would never have to be hungry again. As he got older, he started taking occasional cooking classes.

Diliiza moved to Maine 17 years ago to check out the music scene, and ended up teaching metaphysics. After his Westbrook school closed, Diliiza had the urge to start baking again. He posted photos of his creations on Facebook and gave away what he baked to friends

“I asked people, ‘If I decide to open a bakery, would you all support me?’ ”

They said yes, and between a crowd-funding campaign and outright donations from friends, Diliiza was able to lease the old building at 131 Ossipee Trail West. It had a Vulcan stove and plenty of space for prep work. Diliiza, his family and friends replaced the floor and patched holes in the walls. They painted the space purple, green and gold, stained five tables and bought two vintage booths. It is warm, casual and inviting.

Diliiza also found the time to research his family history, and says he discovered the identity of his biological father – a Maori from New Zealand. Diliiza had half his face tattooed in honor of his newfound heritage.

Now Diliiza rises at 4:30 a.m. every day to start the day’s baking and stays for up to an hour after the business closes at 3 p.m. Giving up salt, he said, has not only lowered his blood pressure, it’s made him more relaxed and creative in the kitchen. What he is doing at his bakery mirrors what is happening in his simplified life.

“Salt isn’t bad,” he said. “That’s not what I’m saying. It’s just that we’ve been taught that we need more of everything. And sometimes that’s just not good.”